Fricke disbanded the Moog-synthesizer very soon and turned to acoustic instruments. Another ‘electronic’ instrument played subsequently an important role for a very short period. We are talking here about a mellotron-like instrument, the so called ‘choir organ’, used by Fricke for the 'Aguirre'- theme.It is difficult to identify with absolute certainty what kind of instrument it was: a serial produced instrument or an unique self-built instrument as is often suggested.

All available information suggests it was a self-built mellotron-like instrument, placed in a studio in Munich.

Little is known, so many questions arise:

- Are there any statements by Fricke himself on the instrument?
- Or by other musicians who actually played it?
- What is the first mentioning of the term 'choir organ' on record sleeves, etc.
- If it was a serial-produced instrument, why was it called 'choir organ'? The term was never used for a serial produced mellotron.
- Who coined the term 'choir organ'?
- Who built it?; who owned it?; which studio?

Information on the original 1975-release of the album is not of much help. There is no mentioning of the Moog, used for 'Vergegenwärtigung', nor of the choir-organ for 'Aguirre'.

Nor does Florian Fricke refer to the instrument in any of the interviews I know.

Danny Fichelscher states that this instrument came from Vienna, and also refers most likely to Herbert Prasch. (See: BBC Documentary 'Krautrock -The Rebirth of Germany)

In November 2013 I finally had a short phonecall with Herbert Prasch. He assured me that the choir organ was already in the studio at the time he took it over from sound engineer Clemens Brendel. So Prasch is not the constructor of this instrument. He also stated that Fricke's Moog was first installed in his studio. "Nights were very short in these days", he assures me.

We can hear this instrument in "Aguirre I" and "Aguirre II". These tracks are also in the film that was premiered December 29, 1972 in Germany. The recordings were probably made during the second part of 1972.
How did Fricke’s work for Herzog’s Aguirre came about? In an interview (Keyboards, 1993) Fricke explains:

In her article ‘Fitzcarraldo's Search for Aguirre: Music and Text in the Amazonian Films of Werner Herzog, published in: Journal of the Royal Musical Association (January 2004) musicologist Holly Rogers she writes: 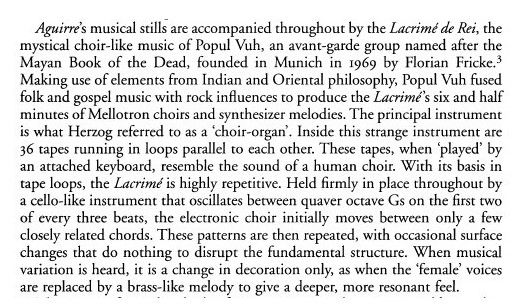 She included no reference for the source of her assertions here. But from the text it is clear she bases her lines on Herzog. Most probably she refers to ‘Images at the Horizon’ (1979). Here Herzog explains:

[...] “I’ve always worked very hard to select the music, but, in doing so, I’ve usually worked very closely with my friend Florian Fricke. For example, to create the music that is used in the opening of AGUIRRE we used a very strange instrument which we called a ‘choir-organ’. This instrument has inside it three dozen different tapes running parallel to each other in loops. The first of these tapes has the pitch in fifths, and the next has the whole scale. All these tapes are running at the same time, and there is a keyboard on which you can play them like on a organ so that, when you push one particular key, a certain loop will go on forever and sound just like a human choir but yet, at the same time, very artificial and really quite eerie.”

This quote dating from 1979 is the first mentioning of the term 'choir-organ' in relation to 'Aguirre'. Interesting is that Herzog says " which we called a 'choir organ". The statement suggests the instrument had no name, or that Fricke and Herzog decided to call it a 'choir organ'. The term ‘choir organ’ did already exist and refers to a small pipe organ designed for accompanying singing in a church.

From what Herzog says in the book ‘Herzog on Herzog’ (2002), it is clear that Herzog clearly had in mind what kind of music he wanted for his film:

“We spent weeks recording the birds and the soundtrack was composed from eight different tracks. There is not a single bird that has not been carefully placed as if in a big choir. For the music, I described to Florian Fricke what I was searching for, something both pathetic and surreal, and what he came up with is not real singing, nor is it completely artificial either. It sits uncomfortably between the two. I wanted choral music that would sound out of this world. Florian used a strange instrument called a choir-organ, which is similar to a melltron, and contains three dozen different tapes running prallerl in loops. each tape would be a voice of a single pitch. Put together it sounds like a human choir, but the music has an artificial, eerie quality to it" (p.80)

In an article on Amon Düül published in The Wire (1996) we read the following:

“Lemmings did, however, introduce a couple of important new players to the group's complex sound tapestry: Alois Gromer (an old boyfriend of Renate's) on sitar, and an American ex-GI and jazz keyboard player called Jimmy Jackson, whose contribution to Lemmings and the three Amon Duul-related records that followed involved him playing an extraordinary church organ that would become a crucial component in defining the group's sound. 'It was a large, ancient Mellotron-type instrument that had been designed by some crazy instrument builder,' Renate explains. 'For every key on the keyboard he had made a tape of that note which had been sung by a real choir. It wasn't sampled or anything.' Chris adds: 'He devised a system where he took about 150 matches and stuck them in the parts of the keyboard that didn't work. He painted these with different colours so he knew which keys he could play. It was the first such instrument in the world and Florian Fricke of Popol Vuh used it for his soundtrack music to [Werner] Herzog's Aguirre: Wrath Of God. It's in a museum now."This fragment brings Jimmy Jackson into the picture. At the time Fricke lend his moog to Amon Düül II for ‘Wolf City’, it was possibly through this connection that Fricke discovered the ‘choir-organ’. As a gues tplayer, Jimmy Jackson plays choir-organ and piano on ‘Wolf City’, an album recorded in july 1972. He plays choir organ on the following tracks: "Surrounded By The Stars", "Green-Bubble-Raincoated-Man", "Jail-House Frog" and "Deutsch Nepal".

In 2008 Michael Peters from Cologne and I corresponded on the choir-organ with John Weinzierl, Klaus Doldinger and Olaf Kübler. Here some relevant quotes:

"Jimmy Jackson was playing on some of our albums as a studio musician, also playing the choir organ for us.It was through us that Florian Fricke, Doldinger and all the others got in touch with this machine. It used to rest in the "Bavaria" Studios, where various artists recorded and people could use it. Obviously someone has pinched it at some time and I don´t know who´s got it now. Anyway the machine is useless nowadays, because it actually was only a very complicated multitracktapemachine, ahead of it’s time then, but redundant now. The sounds it played, had to be recorded onto it live, so it could be used. It was just 4 big boxes with taperecorders, and 4 sets of keyboards with it."

In an e-mail from August 2016 Fiedler writes: "I remember the choir-organ, a crazy machine. Unfortunately I never found a photo of it. Heavy duty. It had 88 loops of normal recording-tape, running around a construction of two axes with alu-disks to hold the tapes, splitted in two big boxes. All covered by plywood. All together it was a construction of lets say 100-150 kg plus the keyboard".

"Unfortunately we never took a photo - today it would like crazy. It was 60 or 80 tape loops with a keyboard; two big plywood boxes with all of this machinery in it, and it was very noisy when it was running because of its electric motors. We had to use speakers so you hear the music over the noise."

And another statement in an interview for Eclipsed, 2019:

`Oh, that was a hell of a part. I got this thing going with me. This was a mechanical device with, I think, 88 endless belt loops, all of which were scanned analogously. Each band loop had its own recording head. I don't know where it went either. I did some research on it once, but I didn't find what I was looking for. The device was already bizarre in appearance. Two large plywood boxes, connected with thick cables, of course a keyboard and very loud only by his motor skills.`

After a search for many years I came into contact with keyboard player Jimmy Jackson in April 2020. Alas he didn´t have a photo of the instrument, and his memories are not that clear anymore to answer all questions. But he is certain that this choir-organ was one of kind instrument.

Jimmy Jackson participated on albums by Tangerine Dream, Embryo, Amon Düül II, a.o. Also he released on album with his own band Haboob. Some of these albums explicitely mention the ‘choir-organ’ or ‘organ [choir]’ as one of the instruments played by Jackson.

In 1973 Fricke participated in the recording of Gila´s album ‘Bury my heart at Wounded Knee´. Fricke plays mellotron on several tracks according to the liner notes. This album was recorded at Dieter Dierks Studio near Cologne. Dierks had a mellotron in his studio that was also used by Sergius Golowin, Wallenstein, etc.

Reading the diverse descriptions of the instrument, I’m not sure they are all talking of one and the same instrument. The different quotes cannot be harmonized into one coherent description.