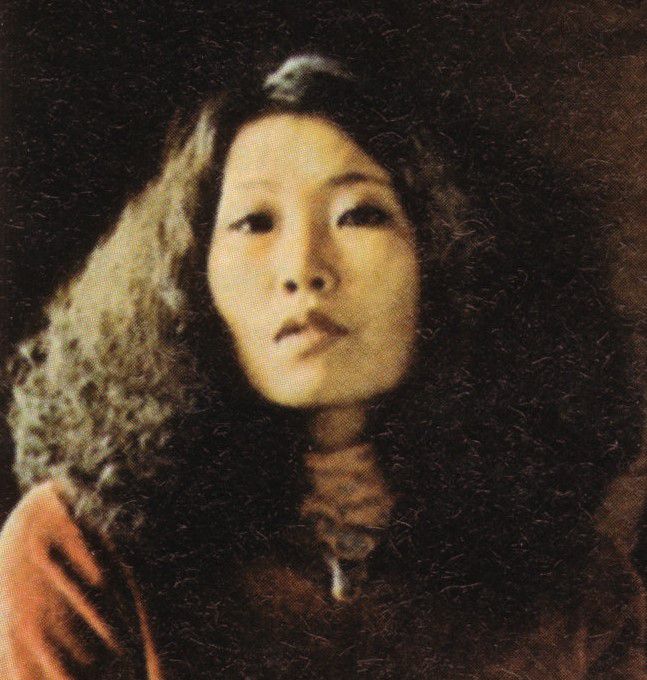 According to a promosheet, enclosed in‚ 'Das Hohelied Salomos‘, Djong Yun received education in singing from „Frau Winterfels“ who was also the teacher of the famous baritone Dietrich Fischer-Dieskau. Probably Margarethe von Winterfeldt is meant here, who worked in Berlin until her death in 1978.

1989:
Ian Laycock: You spoke of singers. I wanted to ask who it was who sang on Hosianna Mantra because she has such a pure voice. On the sleeve in England there were no credits at all.
Florian Fricke: She is a young Korean, Djong Yun, and she's the daughter of the modern classical composer Isang Yung who's Professor at the Berlin Music School and wrote the Opera for the Munich Olympics. She has an angelic voice, really. (Audion, 1996; www.eurock.com)

1996:
Gerhard Augustin: In HOSIANNA MANTRA there are some new personnel, such as Conny Veit and Djong Yun. How did you meet them, and how did you come to play with them? Let's first talk about Conny Veit. How did you meet him?
Florian Fricke: Actually, most of the musicians have always sort of found their way to me to play with me. I met Conny Veit at United Artists, my record label at the time, in the office of somebody I knew there (actually GA himself).
Gerhard Augustin: But this is how Conny started playing with you, he came to your house and you guys just sat down and played?
Florian Fricke: Yes, and he has did this every day. And that is how we actually prepared for almost half a year to records the album HOSIANNA MANTRA.
Gerhard Augustin: And then Djong Yun, how did she come into the picture?
Florian Fricke: Djong Yun came to Munich; she is the daughter of a famous composer. She got the melodies, she was listening to what we were playing and she heard the melodies and started singing with us. Yeah, we called it rehearsal! [laughs]
Gerhard Augustin: Did you, Conny Veit and Djong Yun ever perform as a band, publicly?
Florian Fricke: Yes we did, actually, in Lieberkosen and Munich.

Gerhard Augustin: How did you really get to meet Djong Yun, the very first time? Have you heard about her from other friends?
Florian Fricke: In those days I was living in Munich in Halachein. Musicians from other towns and cities that came to town came to Munich, by recommendation or desire or whatever, came by my house, and we were just jamming. One day Djong Yun came there. I was playing with Andy Fix, the guitar player, and he was talking about this incredible girl from Berlin, this singer from Berlin, and he said that I had to meet her. That she was fantastic. I was working with Esther Ofarim in those days, but it didn't work out because she refused to sing Christian lyrics, being Jewish I guess, so she didn't want to interpret this kind of song. Which I did understand. In those days there was not this competitive feeling among musicians, and the contacts were loose and open. People were just visiting each other for the sake of music, and not to discuss their recording contracts. In a certain way we were all hippies in those days. (www.eurock.com)

Nowadays Djong Yun lives in South Korea, working for the Isang Yun Peace Foundation as representative director. In an interview for Infomag she explains:

Infomag: Can you briefly explain the background of Isang Yun Peace Foundation?
Djong Yun:The Peace Foundation is simply the first commemoration organization which was named after my father, great composer, Isang Yun. There is International Isang Yun Society in Germany, Isang Yun Music Institute in North Korea. The organization is founded to contribute my father's music in Korea too. It was established in March 2005; we formed an annual event on the 10th anniversary of my father's death in same year. He is father not only for me, but our nation and also he has great meaning in the international art history. Unfortunately he is still underestimated, and even worse misjudged with his life's dramatic journey. So if we do not try to tell about him he will get be forgotten. That's why we felt the reasonable need of a foundation and started to move.

For information on her father, the composer Isang Yun: www.yun-gesellschaft.de