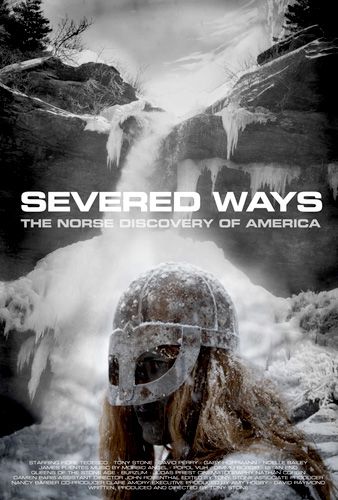 For this film director Tony Stone chose some music by Popol Vuh for the soundtrack, as he explains in a interview for All Metal Resource:

AMR: Tell us a bit about some of the artists that are featured throughout Severed Ways?

AMR: Despite all that I have said about this film being pretty much filled to the brim with metal themes and connotations, there really aren’t that many heavy tracks. Most of it is ambient and atmospheric songs taken from metal artists. How hard was it to pick the right music?

Tony: A lot of what we hear is what we were cranking while making the film, so it was a natural fit to put in in. The heavy stuff is used when the VIkings are a cohesive unit and kicking some small scale ass, so we used triumphant early Dimmu Borgir and Old Man’s Child. As the characters fray apart, the more atmospheric metal kicks in, which is just as heavy in a way. It’s all coming from the same perspective. When they’re on a spiritual quest, we go in more 1970’s psychedelia land, using Brian Eno and Popol Vuh to tell the tale. But the spiritual power of Burzum underlines the film, representing the all-encompassing power of nature. It’s there as an ery existential theme of the soon decay we’ll all find ourselves in.

AMR: Are you planning on releasing a soundtrack to accompany the film?

Tony: I don’t think so but we’ll see. Maybe a limited edition vinyl. Bands were super helpful in allowing me to use the music but a soundtrack is another level of complication. But it would be awesome.

In an interview by Christopher Long (Movie News, August 21, 2009) he is more expliciet on Popol Vuh:

CL: In addition to black metal and Eno, you also have some great music from Popul Vuh. What made you think they would go together well on a black metal soundtrack?

TS: I think it comes from the same place. To me, there's some sort of pagan aesthetic that's deep in them. Popul Vuh represents a force of nature, the Earth in a way. Which is also in a class with metal when it gets more ambient. I don't know if people even know that most of that (ambient music) is made by heavy metal musicians. Metal is classical music cranked up and distorted, and I think there are classical elements sonically and vocally in Popul Vuh as well, the same rhythm and the same pulse.

CL: Speaking of Popul Vuh, a lot of critics have compared your film in some ways to Werner Herzog's "Aguirre" which is a pretty tough comparison. Was this one of the films that inspired you?

TS: Absolutely. I admire directors who are about. Herzog just throws you in the middle of the chaos of the jungle and you're living like the characters are living. In "Aguirre" when they're filming the scene on a raft on the Amazon there's another two rafts behind that the cast and crew are living on. That's something I'm really into, trying to get some authenticity and intensity and really putting yourself out there. There's also an absurdism that comes through in it, picking these impossible tasks that characters think they can solve when they really can't.