GENESIS - THE LAMB LIES DOWN ON BROADWAY 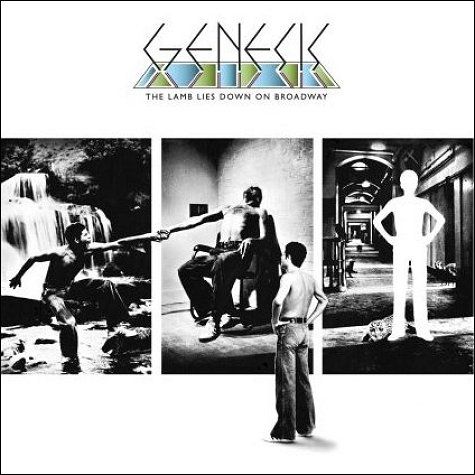 This instrumental, showcasing the Mellotron and a "six-note pedal-volume guitar motive (Couture, n.d.), is a static interlude, closing Side 3 of the original double album. Its sole purpose was to provide an open-ended pause in the narrative, allowing Gabriel to exit the stage in the darkness, leaving the empty Lamia costume behind and change into his Slipperman costume. The unwieldy costume and difficulties in microphone placement inside the costume meant that the rest of the group had to "buy time" to allow the costume change. Because of its function as a dramatic set-piece, the song was not performed again after the Lamb tour. Musically, the song bears some interesting similarities to the song "Aguirre" by the German group Popol Vuh, featured in the Werner Herzog film Aguirre, der Zorn Gottes (1972). "Aguirre" similarly features a pedal-volume guitar ostinato over slowly changing Mellotron-choir pads. It is uncertain whether Genesis was aware of the Herzog film; the song was not released on album until 1974, when a compilation of Popol Vuh’s music was released on the Ohr record label in Germany. It is quite possible that Gabriel with his wide range of interests including art cinema (he was attracted to the work of Alejandro Jodorowsky, for example) had encountered the Herzog film. The mellotron theme emphasizes the lower tetrachord of the E Lydian mode ( E - F# - G# - A#), lending a certain mysterious or exotic mood to the instrumental. This choice of mode also provides a subtle means of preserving continuity between the end of Side 3 and the beginning of Side 4 as the "Arrival" section of "The Colony of Slippermen" Is in F major, the organ ostinato again emphasizing F# - G# - A#.

From: Kevin Holm-Hudson, Genesis and The Lamb Lies Down on Broadway, Ashgate Popular and Film Music Series, 2008 , p.89-90.