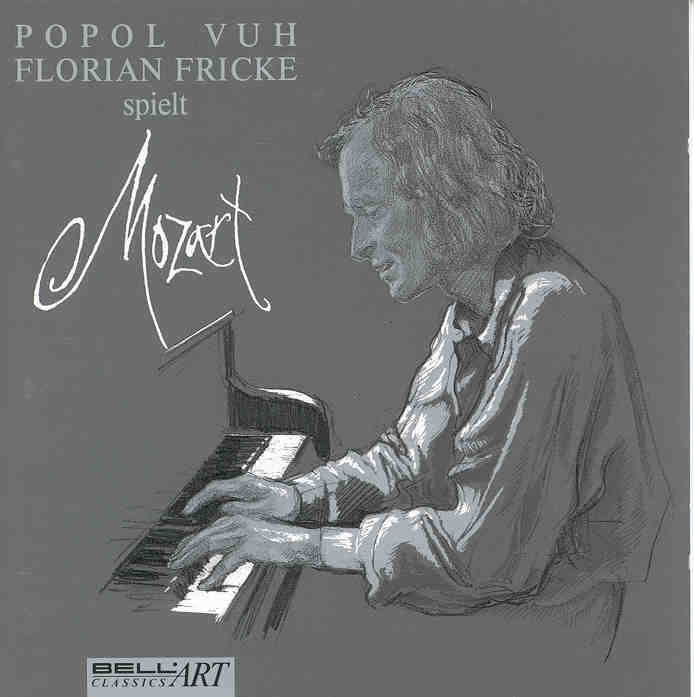 "I don't seek showmanship in virtuosity", says Florian Fricke, and that is not the audacious coquetry of the successful hero of the concert platform. This sentence should rather be regarded as the credo of a sensitive, thoughtful musician, who in the last 20 years has proved often enough that he does not need to put his skill on obtrusive display. Whether in the role of Werner Herzog's "audio interpreter" - he wrote the music for films such as "Herz aus Glas" (Heart of glass), "Fitzcarraldo" and "Nosferatu" - or as the creative power behind the formation Popol Vuh: Fricke has always been concerned more with the inner vibrations of the music than with its superficial effect.

He was one of the pioneers of electronic music when he recorded the album AFFENSTUNDE (The hour of the apes) with Popol Vuh 20 years ago on the Moog synthesizer, which at the time was still prohibitively expensive and rare. In the process he was in fact already anticipating musically everything which was conceived in the 1970's as meditative music and then commercialized ad nauseam in the 1980's under the cheap label "New Age". But Florian Fricke's interest soon shifted from playing around with the technical possibilities of the synthesizer to the investigation of inner worlds of sound, to the exploration of meditative and often religious dimensions. His development moved away from the pop roundabout, away from the veneered superficiality of constant exposure to all-too-lovely instrumental sounds - and towards serious, intensive study of the positive vibrations which deeply felt music can create in the musicians as well as the listener. Listening to the echos of inner spaces has since been the element running through all Florian Fricke's musical creative work.

This element is also present in the recordings on this CD - although the musician and composer surprises us with an unexpected programme: Florian Fricke plays Mozart. Only twa or three years ago he himself would not thought this possible: "I had too much respect for Mozart creative work, and as a composer I knov exactly what I am talking about here. Fo he was capable, like no other compose of treating pain and suffering in his musi in such a way that the result was pur beauty. This music is dominated by smile - a deep inner peace in spite of a: the strokes of fate which life had in stor for Mozart."

Why is it that Fricke, who up till now ha let himself be guided only by his ow ideas of sound, suddenly plays the work of a composer who, in this year markin the 200th anniversary of his death, is not exactly lacking in commercial exploita tion? Did he just want to jump on to the bandwagon? Did he just want - like man clever strategists in the world of art an music - to profit from the general Mozart euphory which in fact began a few year ago with Falco's pop hit "Rock M Amadeus" and with the cinema hit Amadeus"? Such suppositions prove to be groundless as soon as one takes a good look at Fricke's career. Born in 1944 by Lake Constance, he studied composition and piano from 1959 till 1963 in Freiburg and Munich, where he was a pupil of Rudolf Hindemith, Paul Hindemith's brother. "I was already an admirer of Mozart at that time", the introverted musician tells us - and for several years now he has been occupying himself with Mozart's world of sound with growing devotion at his grand piano in his quiet house in the Grünwald district of Munich. "At some stage I sat down at the piano and continued from the point at which I stopped many years ago. And in doing so I realised that of all classical composers I love playing Mozart most of all, because I get the most back. When I play his music I call back the soul."

Fricke is aware that this intimate relationship to Mozart's music is nourished by the incomparable lightness of the music which has nothing to do with superficiality. "He was capable of translating his own attitude to life into inusic in the most perfect way and thus of appealing to the natural feelings of every person. And this is exactly how I play Mozart: I try to establish a living contact to human feelingjust as this music moves me again and again to the depths of my soul."

How does Fricke play his Mozart? "He himself formulated in a letter to his father how he would like his music played. He says it must be played just fast enough so that every note can be heard, and no faster." And this means for Fricke that it is a case of "involving oneself completely in the vibrations of this music. The runs must sound exultant, jubilant. But in spite of these vibrations Mozart always remains in the right proportions, and it is a great challenge for me to let the soul of Mozart's music be heard in the wonderful melodies in spite of all the coloratura - just as it has been revealed to me again and again all through the years. For what Mozart achieved is still a help to me as a human being 200 years later. It would be lovely if the listener could experience this too."

When Florian Fricke plays a selection of his favourite works by Wolfgang Amadeus Mozart on this recording, then he hopes that the soul of this music manifests itself in his playing. Even if at first sight this seems a lot to ask, it expresses no more and no less than the aspiration of an honest musician attempting to involve himself in a dialogue with all his feelings and emotions and without hidden motives - in the dialogue with Mozart as well as with the listener to these interpretations. "If I succeed, then I am living at Mozart's court while I am playing, and the fact that he died 200 years ago is no longer of any significance. For in the notes of his works he is still alive, and if he smiles a little while I am playing then I am completely satisfied."
Amadeus would surely have been glad about such an attitude.

While he was still a student he was very involved with Mozart. But at the age of 19 he took his leave of the Conservatory, "just so that I could live", as he said. At the age of 25 he became acquainted with the Moog synthesizer, which led to the founding of the group Popol Vuh. Foreign travels took Florian Fricke, among others, to Africa and to the Kurds on the Euphrates, to India and Nepal. And in the eastern Himalayas he studied Tibetan communal singing. He once described his hobbies as the epics and the myths of the various peoples as well as archaeology.
When Fricke founded Popol Vuh in 1970 together with Holger Trülzsch and Frank Fiedler, he oriented himself to the myths of the Mayas. He became involved with Buddhism and practised yoga.
On their first two records - "Affenstunde" (The hour of the apes, 1971) and "In den Gärten Pharaohs" (In Pharaoh's gardens, 1972) Popol Vuh was the first German group to use the Moog synthesizer. After this Fricke dissociated himself from synthetic music and turned to natural instruments; since then he has played the piano. Connected with this is the increasing tendency to use subject-matter and themes from the Bible. Records such as "Hosianna Mantra", "Das Hohelied Salomos" (The Song of Salomon) and "Seligpreisung" (Glorification) reflect the deeply-felt religious committment of the composer.
Since 1972 Florian Fricke has been working with the director Werner Herzog. He composed the sound-tracks for the films "Aguirre, der Zorn Gottes" (Aguirre, the wrath of God), "Herz aus Glas" (Heart of glass), "Nosferatu", "Fitzcarraldo" and "Cobra Verde". With the Mozart interpretations on this recording the wheel has come full circle: Florian Fricke has gone back to his roots; he involves himself in the intimate dialogue with works which have accompanied him since the earliest stages of his musical development and which have never ceased to inspire him again and again.
Manfred Gillig-Degrave 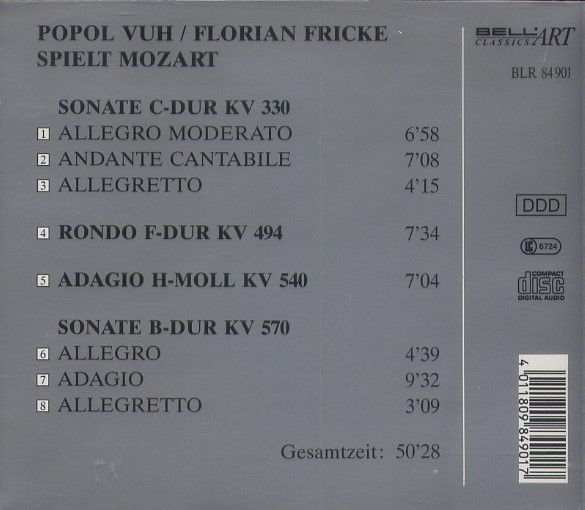 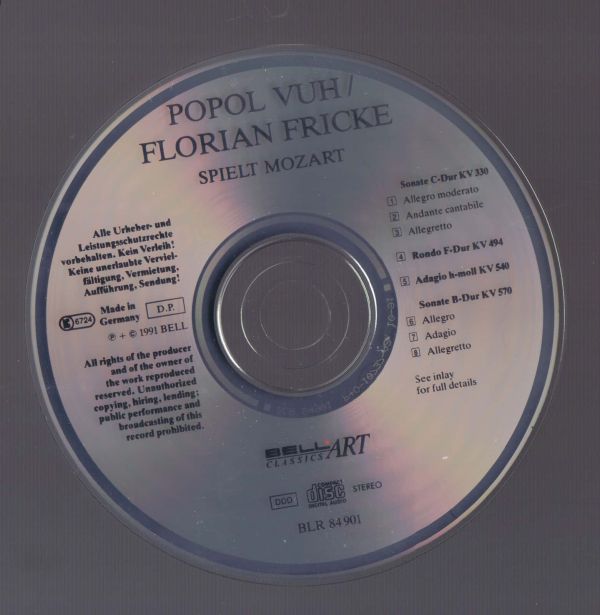 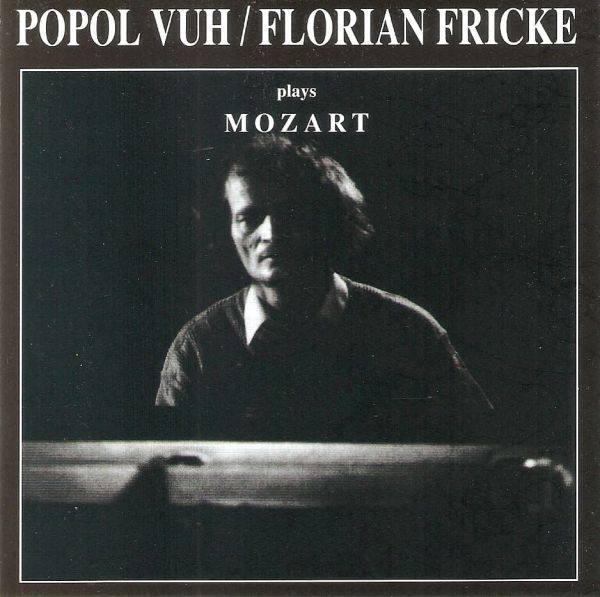 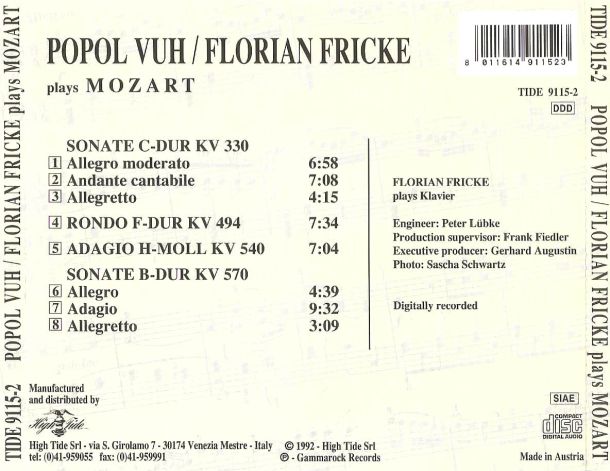 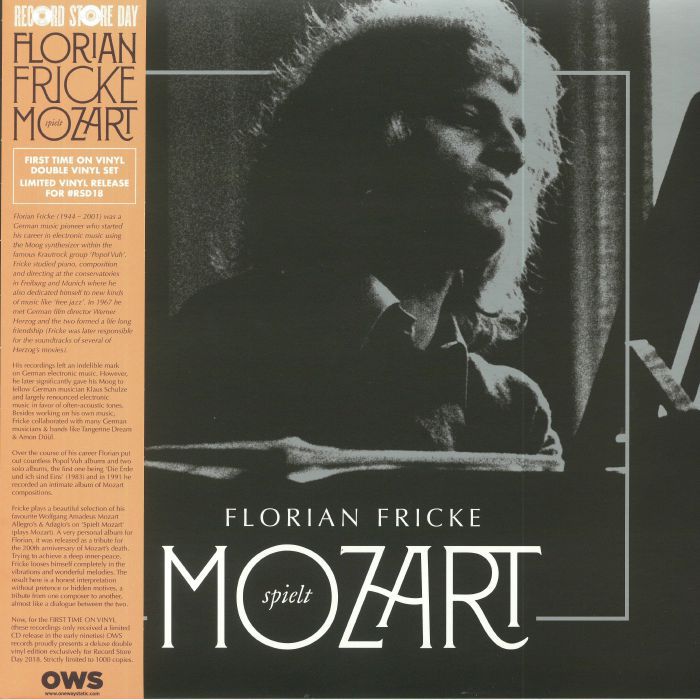 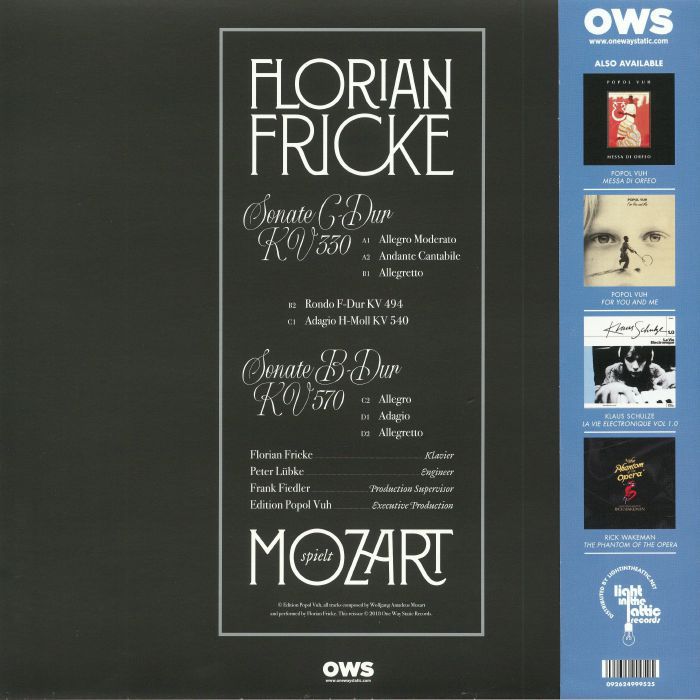 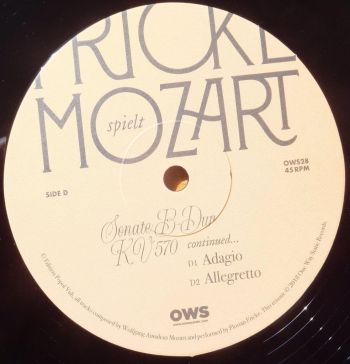 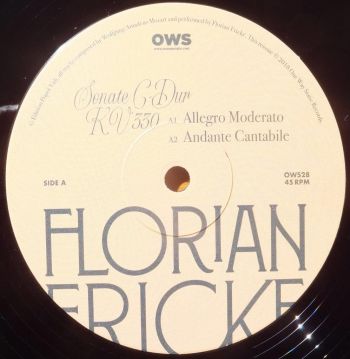