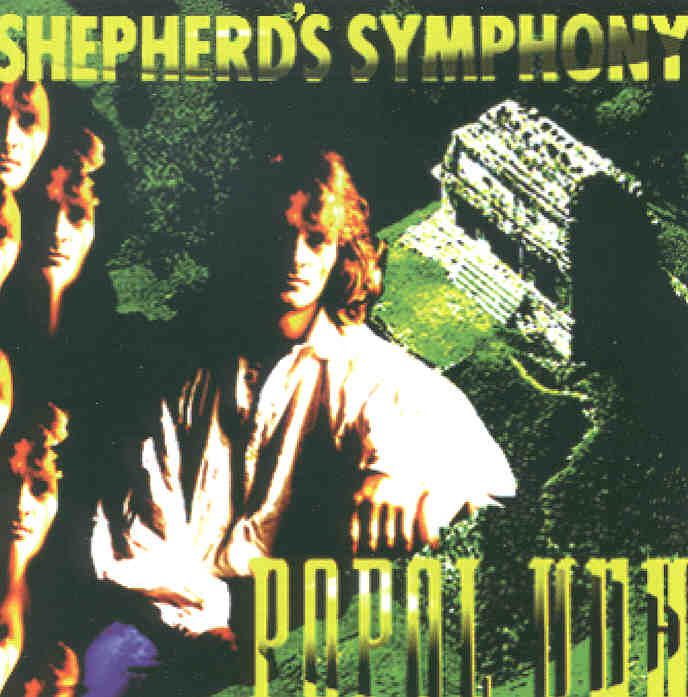 Shepherd's Symphony is the 25th album release by the phenomenon known as POPOL VUH, the musical outlet for over a quarter of a century for Florian Fricke.
Florian Fricke, musician, arranger, piano player and producer has become a public figure in the World of music through his collaborations with film Director/Producer Werner Herzog, writing the soundtracks for the classic movies AQUIRRE; NOSFERATU; COBRA VERDE and FITZCARRALDO.
The name Popol Vuh derives from the book of knowledge, the POPOL VUH - the sacred book of ancient Quiche Maya Indians. The book is without any shadow of the doubt the most distinguished example of native American literature that has survived the passing Centuries. Of all American peoples, the Quiche of Guatemala have left us the richest mythological legacy. Their description of the Creation as given in the Popol Vuh is, with it's rude strange eloquence and poetic originality the rarest relic of aboriginal thought. The book Popol Vuh presents the complete picture of the popular traditions, religious beliefs, migrations and development of the Indian tribes that populated the territory of Guatemala following the collapse of the Ancient Maya Empire.
The musical entity, Popol Vuh was founded in 1969 when Florian Fricke, Frank Fiedler, Holger Trulzsch, Bettina Fricke and myself produced the first album of Electronic music with a Moog 111 Synthesizer entitled "AFFENSTUNDE" The Hour Of The Monkeys.
Florian Fricke originated from Lindau/Bodensee and studied at the Freiburg Musikhochschule, studying under some of Germany's most eminent teachers. At the age of 19 Florian quit his academic musical studies in order to begin working on his own ideas. When the MOOG Synthesizer was made commercially available in Germany he was so fascinated by the new revolutionary toy that he spent some years working with the keyboard instrument.
Being so far advanced technically, it was difficult for Florian to find partners in the music industry who were willing to give his artistic output the support required to move beyond his one, initial commercially unsuccessful album. However Florian persevered with the help of a steady recording band augmented by the incredible Korean singer Djong Yun. As his successes grew, so Florian, a deeply religious man, applied and added many biblical texts to his music resulting in his albums attaining a huge reputation in the Alternative and New Age music circles.
After spending 25 years turning musical dreams into realities Florian Fricke, Frank Fiedler and Guido Hieronymus have, with Shepherd's Symphony recorded an album that sounds quite unlike anything previously released under the name Popol Vuh.
Shepherd's Symphony is a reflection of the desire by Popol Vuh to encroach upon the avenue of popular music. In this, Florian has been heavily influenced by his son Johannes whose love for Hip-Hop and Techno Trance Sounds led to his convincing Florian of the need to write material that would appeal to the younger generation of music lovers whilst retaining the support of existing fans.
Florian Fricke has always been open to change within his music and to experiment with samples and sounds, he recently ventured into the World of Dance, always striving to ensure that his critics could not point to any stagnation in his music. His previous album, CITY RAGA, indicated a coming change which has been completed with the Shepherd's Symphony CD.
The Symphony is modern schamanistic music and will gain Popol Vuh many new admirers. Florian has always tried to walk new paths, untouched by others, it is an expression of Florian's freedom to remain an innovator and never to become an imitator. "Hirtensymphony", is the title of a new German film recently made in Tibet by Florian, who travels, once every five years to Himalaya where on his last journey, accompanied by his longtime friend and co-producer he conquered the Kailash mountain.
In Germany we have a very old creative tradition based on a sort of mystical tendency toward the absolute. Before Popol Vuh we produced many great poets, philosophers, some wonderful music and sadly, mad fascism. Today we are allowed to work and create freely and, in this way, we can develop our musical fantasies and relay them to the listeners. We personally enjoy music as sometimes creative and this is what we wish to convey to others. The music of Popol Vuh is relaxing, but never boring. It is gentle, but not slushy. It is like the Ocean at Sundown, like the Desert by Night, like the Sky at Dawn.
Think Deep, Think Sleep, Think For Yourself!