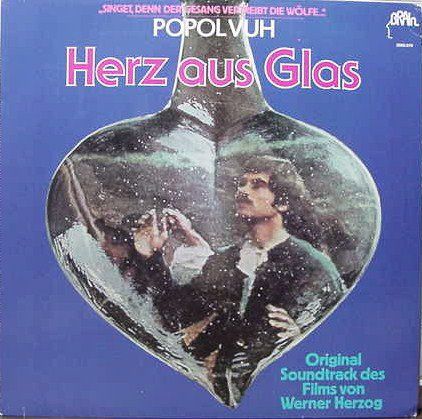 1996:
Gerhard Augustin: I saw the film "Herz aus Glas" (‘Coeur de Verre’) and I found that not very much of your music was used. In the album with the same name of the film, COEUR DE VERRE, is Popol Vuh's original album to be the soundtrack for the movie?
Florian Fricke: It was different. Sometimes they're produced for Werner Herzog's work. Sometimes he came to my house and he asked please open your box, where I have my tapes from my productions. When we are listening to music, sometimes he lifts his finger and says this part of your music would be great music for a film. Sometimes we have done in a very short day and night, time in studio at the end of production from his movies, chosen the music like this. The special music for COEUR DE VERRE ("Herz aus Glas") is Popol Vuh, but sometimes he needs music from Richard Wagner. But Richard Wagner never made film music for Werner Herzog. (Eurock)