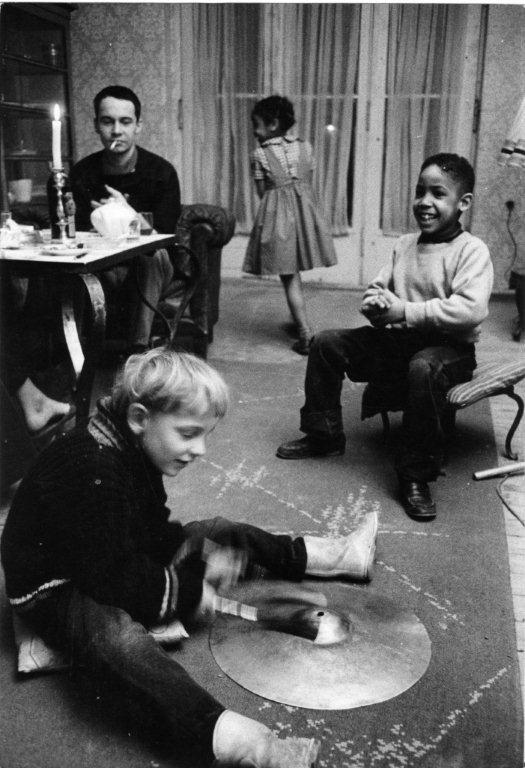 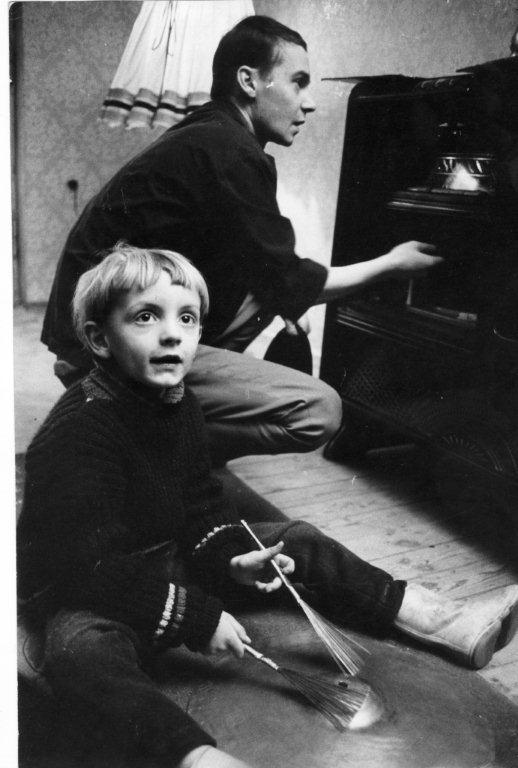 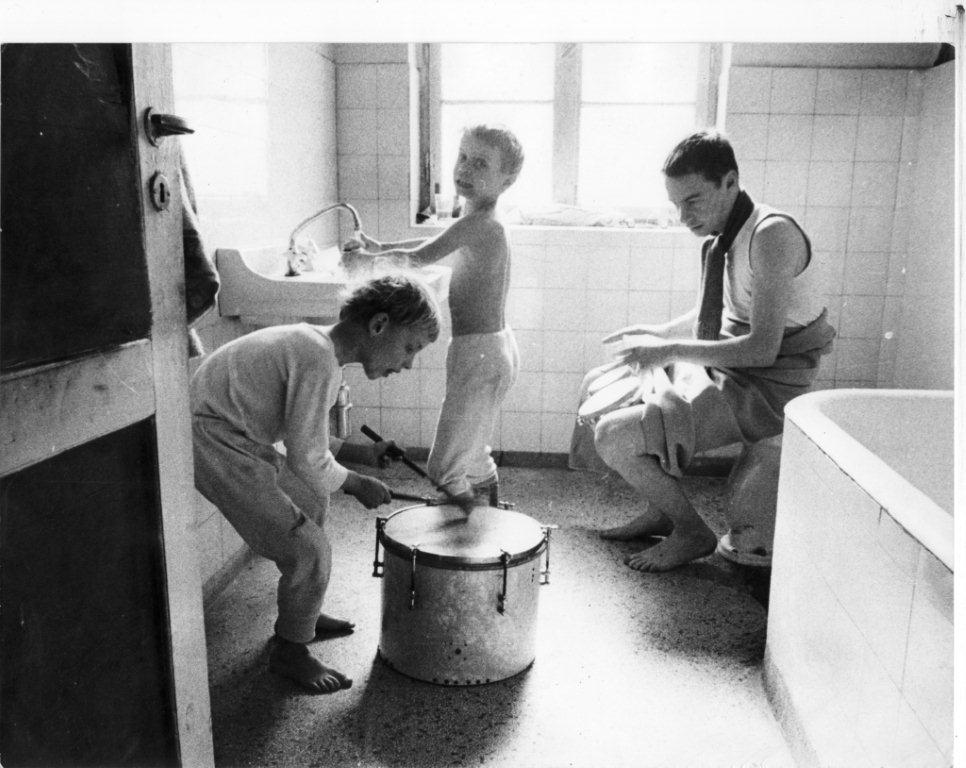 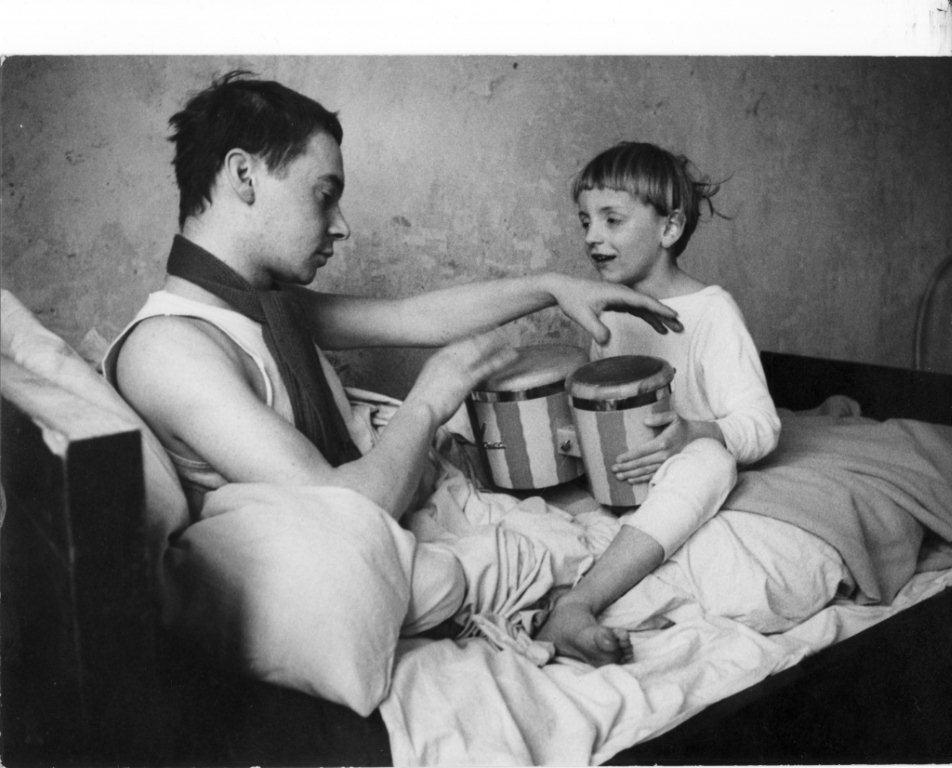 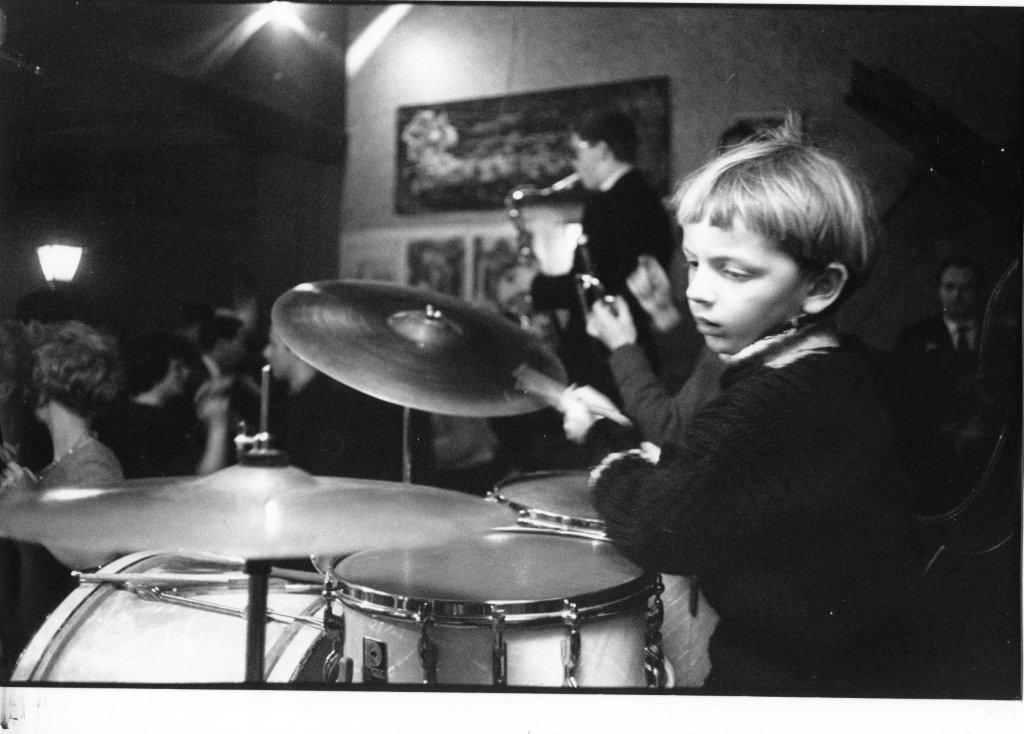 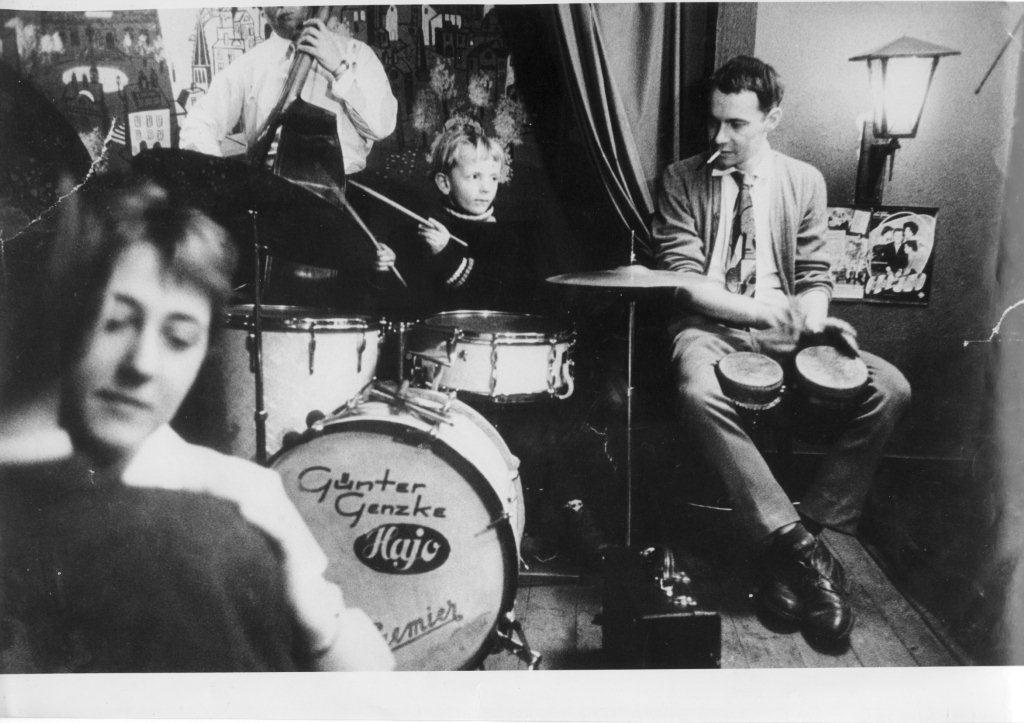 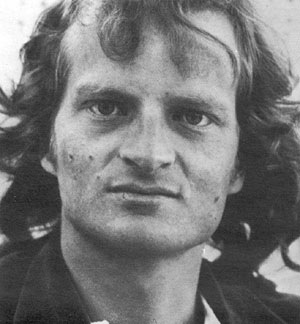 With Popol Vuh: all

In a letter, dated 19.1.1975, Florian Fricke informs rock journalist Günther Ehnert, who was preparing the first edition of his book ‘Rock in Deutschland’. In this letter Fricke gives following account of Popol Vuh:

In a second letter (3.11.1978) to Günter Ehnert, who was preparing now the second edition of his ‘Rock in Deutschland’, Fricke adds the following:

FLORIAN FRICKE AS AN ACTOR

It is too much said to call Florian Fricke an actor, but he did appear in two films by Werner Herzog. Playing music of course...

Florian Fricke plays the role of the blind pianist. In one scene Florian sits behind the piano and plays ‘Aguirre’.

1981:
“During the making of the ‘The Enigma of Kasper Hauser’in 1974, Herzog was at Florian’s house while he was playing the piano. He was improvising and just staring at the wall in front of him. Herzog passed comment on the fact that he was playing ‘blind’. A few days later Florian got a call to go to the set. A part had been specially written for him as Florian the blind and orphaned piano player.” (Neumusik, 1981) 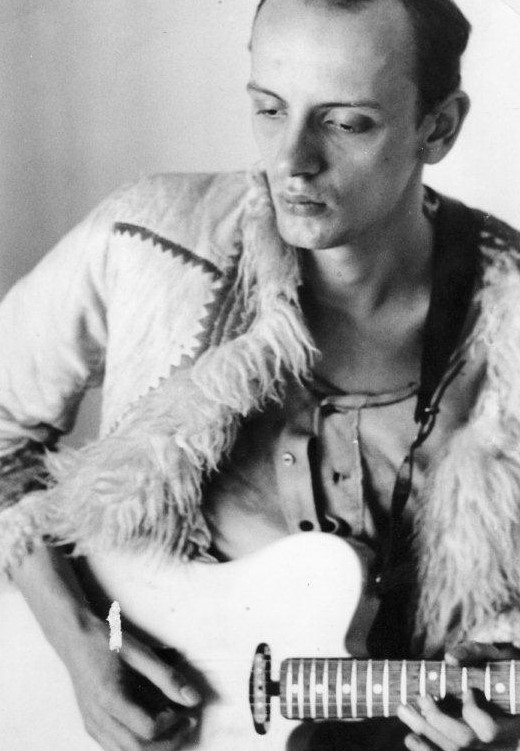 *) Strange radioplay by Wolf Wondratschek, Bernd Brummbar and Georg Deuter. According to Dag Erik Asbjornsen in his book ‘Cosmic Dreams at Play’, both Renate Knaup and Daniel Fichelscher participated in this project.

1971 seems to be year that Daniel Fichelscher entered the scene in Munich. He joined Amon Düül II as a second drummer. In the same year he joined the drumproject Niagara of Klaus Weiss.

In her book ‘Tanz der Lemminge’ on Amon Düül II, Ingeborg Schober writes about the origins of Daniel Fichelscher:

His father was Toby Fichelscher a well-known jazzmusician in Berlin.

Toby, Danny as well as other members of the family played a role in the film ‘Toby’(1961) by Hansjürgen Pohland. (see: imdb)

*
From an article on Gila: 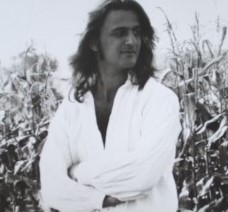 Holger Trülzsch was born and raised in Munich (1939). Both his parents were architects.
He studied painting and sculpture at the ‘Akademie der bildenden Künste’ in Munich (1960-1965).
As a left-wing student he was an active member of the Sozialistischen Deutschen Studentenbundes (SDS) and one of the leading forces of the student protests in this same city.

Successively he worked as a sculptor, musician, painter, and finally as a photographer.

He was co-worker for ‘Die beispiellose Verteidigung der Festung Deutschkreutz’, a short film by Werner Herzog (1967).

From that same year dates his first musical effort: ‘Projekt 1967' (‘Klangskulpturen in geschlossen und freien Raumen’). In 1969 he joined Popol Vuh and played turkish drums on ‘Phallus Dei’ by Amon Düül II. In 1970 he assisted Embryo on their ‘Opal’ album, playing bongos. In 1970 his collaboration began with photomodel Verushka (Vera von Lehndorff) that lasted for two decades. Famous are their ‘Oxydationen body painting’-series.

Gottliebe von Lehndorff, the mother of Vera, owned an estate in Peterskirchen outside of Munich. This is where Popol Vuh, Anima (Limpe and Pauls Fuchs) a.o., settled down at the end of the sixties. Holger Trülzsch still has a pied à terre there. Since 1983 he lives mainly in Paris. 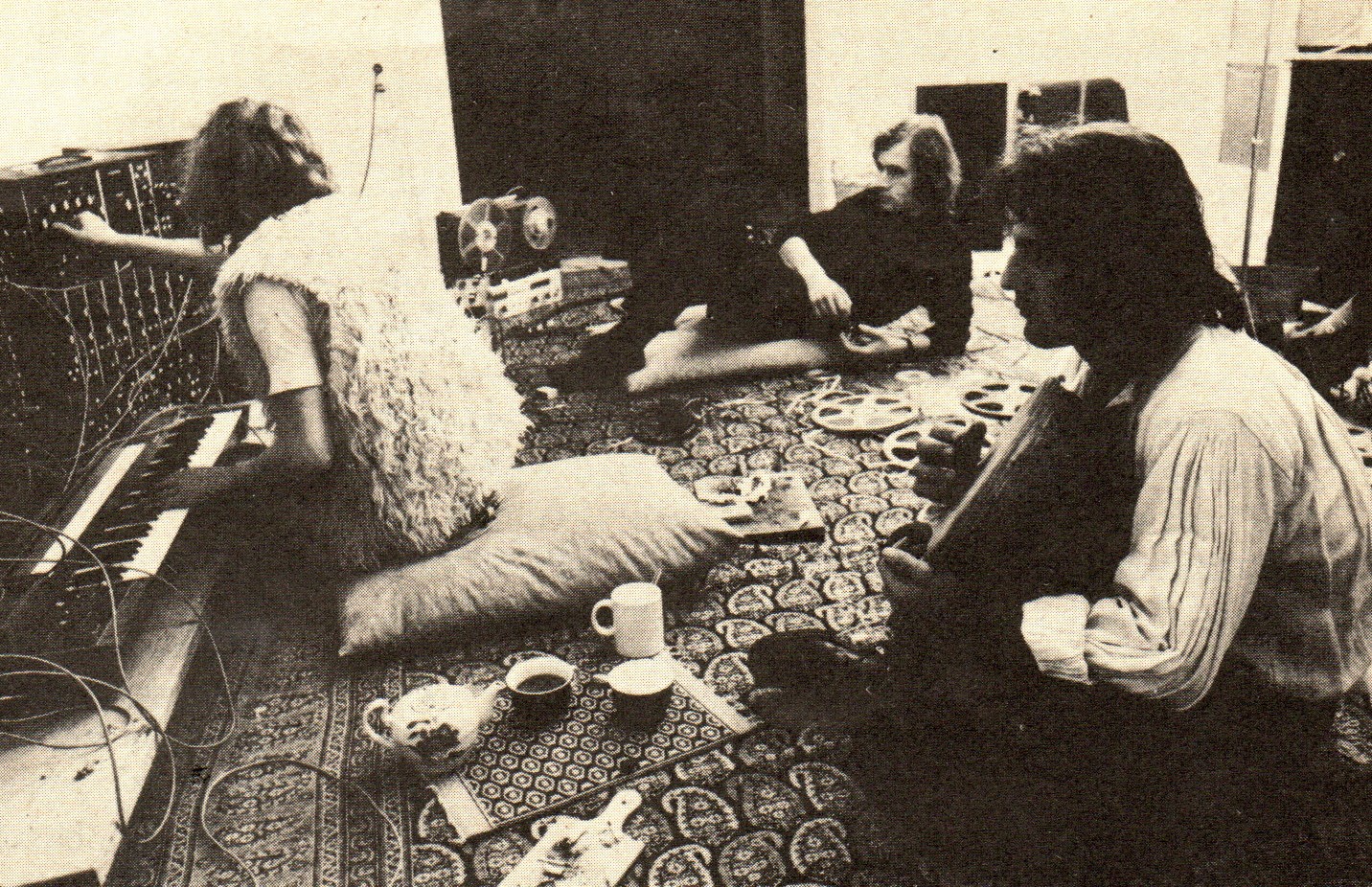 Conny Veit from Stuttgart founded his band Gila in 1969. In his book ‘Der Pate des Krautrock’ Gerhard Augustin, working for United Artists in the 70s, makes mentioning of Conny Veit visiting him - with demotape - in Munich april 1970. The first album of Gila however was released one year later on BASF.
In 1972 Veit returns to Munich again, but with another motive now :

“As for myself, in 1972, aged 21, I decided to move to Munich, because Popol Vuh’s Florian Fricke had invited me to collaborate on his new lp ‘Hosianna Mantra’. I had accepted the offer, yet I didn ‘t want to leave Gila because Popol Vuh was, and still is, a pure studio project. Anyway for me, it was not until I took that step that my life as a professional musician began.” (from: Booklet - cd ‘Bury my Heart at Wounded Knee, Garden Of Delight, 2000)

Interviewed by Gerhard Augustin in 1996 Florian Fricke says the following on how he met Conny Veit:

Florian Fricke: Actually, most of the musicians have always sort of found their way to me to play with me. I met Conny Veit at United Artists, my record label at the time, in the office of somebody I knew there (actually Gerhard Augustin himself).

Gerhard Augustin: But this is how Conny started playing with you, he came to your house and you guys just sat down and played?

Florian Fricke: Yes, and he has done this every day. And that is how we actually prepared for almost half a year to record the album HOSIANNA MANTRA.

At United Artists Veit probably also met Sabine Merbach who worked there. She was to become his girlfriend and she sang on the album ‘Bury my Heart at Wounded Knee ’.

“While working together with Popol Vuh, I came into touch with Amon Düül II, at that time at the height of their career. They were one of the few German bands who kept to the principle of the commune, living together in a big house near Landhut generally known as Kronwinkel. There, I made the acquaintance of Daniel Fichelscher, Amon Düül’s second drummer besides Peter Leopold. I was very often a guest at Kronwinkel and was immensely impressed by Daniel Fichelscher as a drummer, by the ease of his playing, his capacity for enthusiam, his effervescent personality and almost blind understanding in the jamming. So much was clear: this was the man I wanted to win over for Gila as our drummer. Though at the time, what was left of Gila was me, no-one else. ‘Hosianna Mantra’was finished and my collaboraration with Popol Vuh had ended for the time being. I began to think about what Gila’s future might look like. Today it’s no longer difficult for me to admit that I learned a lot from Florian Fricke, perticularly his way of elaborating a musical theme. During the long period of preparing ‘Hosianna Mantra’ - almost half a year or so - I was able to develop a closer relationship to classical music, which had always been foreign to me up until then. Florian had been to a conservatory and was a disciple of Hindemith. No doubt that there were some domains where he was far ahead of me.” (from: Booklet - cd ‘Bury my Heart at Wounded Knee, Garden Of Delight, 2000)

According to the 'Blatt'-magazine Gila was programmed on a benefit-concert for the north american indians, on april 7th, 1974 in Munich: 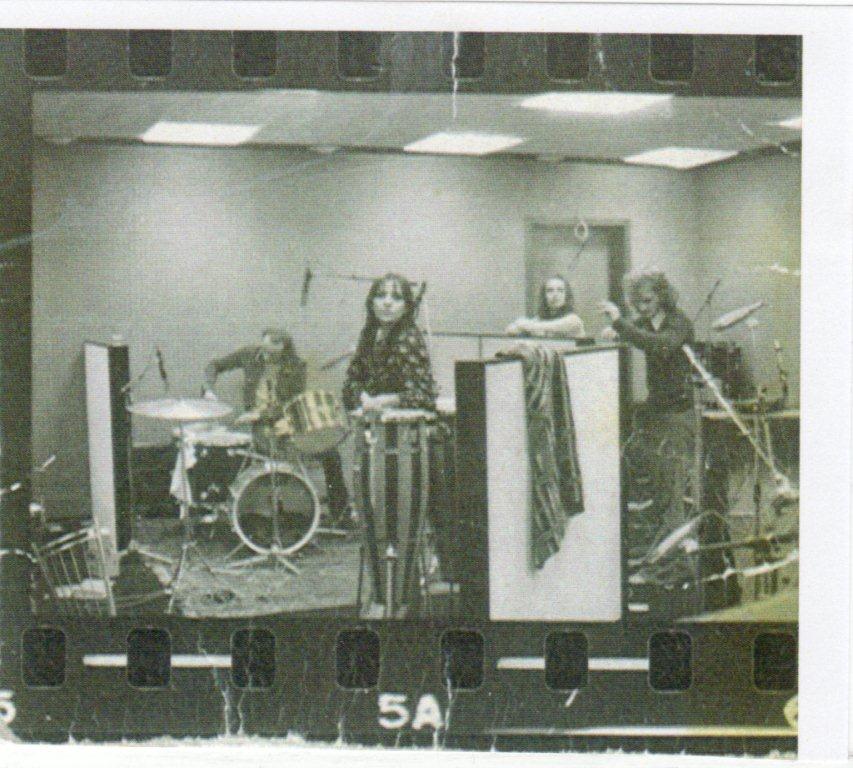