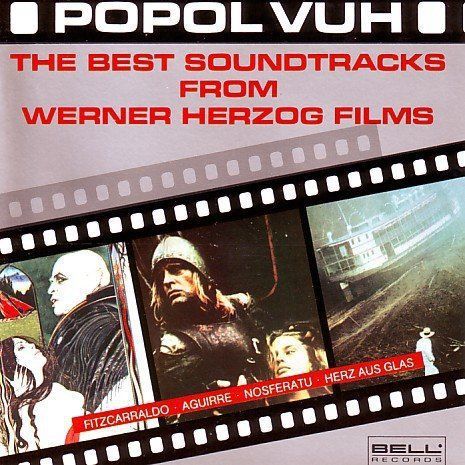 SOUL BROTHERS: THE DIRECTOR AND HIS COMPOSER

The profundiiy-laden expression "kindred souls" is no exaggeration in this case; Werner Herzog and Florian Fricke both strive for the same goals, each in his own field. They plumb the hidden depths under the surface; they seek the transcendental truth beyond the superficial appearance - and thus the stories they tell manifest themselves to the attentive listener and observer as parables for a view of the world which is to a certain extent a mystic one, The means is the end, and thus in the course of the narrations even the end to which they are striving changes and takes on the equivocal character of an open end. Through this the perspective of the observer also changes in the end; Whoever devotes himself to Werner Herzog's films and lets Florian Frickes music work on him experiences a purifying massage of the soul, the result of which is that one's senses are no longer directed towards a final outcome, of whatever kind, but inwards, a process which also sharpens the senses for the further stages of the journey which begins when the film ends.

Werner Herzog is a seeker. He has always shown himself to be fascinated by people who seek their fulfilment in the unfulfillable, who take on seemingly inhuman adversities and expose themselves to the most extreme confrontation with the forces of nature in order to master in this way their inner restlessness and their strong desire for salvation. Nature, however, with her eternal legitimacy her powerful and merciless harmony, remains untouched and uninfluenced. The seeker either finds the fulfilment he seeks in himself, just by virtue of the fact that he is seeking, or he perishes, because he has tried all too audaciously to assert himself against the legitimacy of nature. For this reason the figures in Werner Herzog's films always have the same tragic elements - whether it is Aguirre, the Spanish conqueror, who in the search for the legendary Eldorado meets his end in madness on a raff on the river Amazon, or Fitzcarraldo, his spiritual brother who was no match for the thousandfold wonders of the tropical forest, neither by mechanical means nor by his own force of will. They resemble imperturbable disciples of the Aristotelian view of life, who, searching for the point of intersection of two parallel lines, lose themselves in infinity. They possess the passionate, all-consuming strength of medieval knights on a crusade to find the Holy Grail.

For this reason nobody seems so predestined to illustrate Herzog's films with suitable music and increase their effect as Florian Fricke. For he, too, has never sought salvation in pleasant everyday music which fits perfectly, in the external refinement of his skills or in filing away at formulae which have already proved successful. Although he enjoyed a thorough basic classical training and thus knows his craff through and through, he has never been satisfied with the direct path of economic security and commercial success. He chose to search for inner truth, he went to Asia and plumbed the depths of the meditative connections between sounds. As the founder of the group Popol Vuh he was, it is true, one of the celebrated pioneers of electronic music in Germany - but he was not satisfied with investigating the sound world of the synthesizer; for this reason he established the connection with sacred music at the beginning of the 1970's. When Fricke made the electrons dance, they danced to the vibrations of a human soul searching for fulfilment. This is why Fricke s compositions for Werner Herzog's films are full of deep longing, but they also express hymnic joy and peaceful emotion. And they underline the intentions of the filmmaker; perhaps one could even say that it is through the sensual experience of the music that the audience grasps the intentions of the director for the first time.

In this sense it must be considered an extraordinary stroke of luck for Herzog that he was able to work together with Fricke from an early stage. For the mutual admiration they felt for each other grew into a creative partnership which had repercussions extending far beyond the usual co-operation between director and composer Fricke gave Herzog's images a new dimension; the visual message was acoustically extended and enriched. Many sequences seem to acquire inner coherence only when enriched by Fricke's sounds. Seldom has a composer managed to sum up the intentions of a director in such a congenial fashion. Here two Soul Brothers were at work.

This is also documented by the eight pieces on this CD - musical highlights from the films "Fitzcarraldo", "Aguirre", "Nosferatu" and "Heart of Glass". In this production Florian Fricke worked together with the musicians of Popol Vuh, but also with the chorus and ensemble of the Bavarian State Opera in Munich and with the singer Renate Knaup, who , came from the group Amon Düül. Fricke's piano-playing runs through many titles like an idee fixe or a Leitmotiv; the pearly sounds of AI Gromer's sitar provide the highlights.

In the four motifs from "Fitzcarraldo" (1981) the harmonious co-operation between Fricke and Herzog, which takes on almost sonnambulistic qualities, is particularly and beautifully clear. In this film Herzog tells the story of a man possessed by the idea of staging an opera in an untouched region of the Amazon. For this purpose Herzog - like Fitzcarraldo - had a whole ship transported over an impassable virgin forest on a hill, thus taking on himself a challenge just as crazy as that taken on by his hero, played by Klaus Kinski with his tried-andtested fanaticism.

Kinski was also Aguirre, the monstrous Spanish conqueror of the 1óth century who meets his end in madness on a drifting raft. It was this film, from which the title "Lacrime di Rei" on this CD comes, which laid the foundation for Herzog's fame abroad in 1972. With "Nosferatu", a new film version of Fritz Murnau's silentfilm classic, he provoked fierce discussions in 1978, including the USA. In Herzog's interpretation of the story of the vampire count the forcefulness of the music remained undisputed, supporting once more, as it did, the director's romantic concept of nature and the thematic element of the outsider which runs through all Herzog's films. With his music Florian Fricke achieved a high degree of independence. A short excerpt from the music to "Heart of Glass" (1976) rounds off the programme. In this film Herzog worked, as he said himself, with actors under hypnosis, which contributed as much to the film's power of suggestion as did Florian Fricke's sound creations.

Florian Fricke was born by Lake Constance in 1944. From 1959 till 1963 he studied music in Freiburg and Munich, where he was a pupil of Rudolf Hindemith, Paul Hindemith's brother. At the age of 19 he gave up studying, "just so that I could live", as he said. At the age of 25 he became acquainted with the Moog synthesizer, which led to the founding of Popol Vuh. Foreign travels took him, among others, to Africa and to the Curds on the Euphrates, to India and Nepal. And in the eastern Himalayas he studied Tibetan communal singing. He once described his hobbies as the epics and myths of the various as well as archaeology.

In 1978 Fricke founded the "Working group for creative singing" and became a member of the society for breathing therapy. He holds lectures all over the world on his work in this field.

Since 1972 Florian Fricke has been working with the director Werner Herzog, whose films acquired increased intensity thanks to Fricke's musical trademark. The film director's "audio interpreter" composed the sound-tracks to the films "Aguirre, der Zorn Gottes" (Aguirre, the Wrath of God), "Herz aus Glas" (Heart of Glass"), "Nosferatu", "Fitzcarraldo" and "Cobra Verde". The independent nature of his music has continually proved to be a great asset to Herzog's films, which often have a somnambulistic character. And this independence could already be seen in the film "Nosferatu" in 1978 was not marketed under the film name but as "Brüder des Schattnes - Söhne des Lichts" (Brothers of the Shadows - Sons of Light).